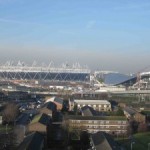 As the capital freezes, interest from amateur landlords in the 2012 London Olympics is hotting up. Tickets for the games go on sale in March. When they’re confirmed in July, a feeding frenzy is predicted as thousands of visiting spectators start chasing scarce accommodation.

If London’s 123,000 hotels rooms fill up, private landlords will be needed to take up the slack. The London Organizing Committee is looking after the ‘Olympic family’ of athletes and officials, but most visitors are on their own.

36-year-old carbon reduction manager, Dina Gillespie, sees a potential money making opportunity. With her mother, she has just bought two flats at Lett Road in Stratford, with a view right over the Olympic Stadium and aquatic centre. She’ll be moving into her £270,000 one-bedroom flat in the next month or so.

‘Being so close to the venue was a big attraction. If I could let my flat out for £500 a week, I would move downstairs into my mum’s place. We’re really looking forward to the event,’ enthuses Dina. She hasn’t approached an agent yet but is thinking carefully about it.

34-year-old publicist Lana Wrightman and her husband have gone one step further. Having just finished doing up their three-bedroom house in Bow, a 25-minute walk from the main stadium, they asked local agent, Christian Thomas, of Currell Lettings about their chances of striking Olympic gold.

‘The area’s being gentrified, and this property is in mint condition,’ he reports. ‘Its long-term rental value is £800 per week, with short-term rentals typically 50% higher. But because of its location, it could be worth £3,000 a week over the Olympics.’

If that sounds a lot, Thomas thinks equivalent hotel accommodation could cost £750 a night.

The Wrightmans wouldn’t actually see all the money, of course. Like other lettings agents, Currell take a 20% commission for finding a tenant and negotiating the contract, plus 5% for managing the property, plus VAT. That now adds up to 30%.

The cost of utilities, except phones charges, are included in the rental, so from the headline figure of £3,000 a week, the Wrightmans could expect to see about £2,000. Will they go for it? ‘With a baby on the way, we’ll see,’ says Lana. ‘I’m not sure if the hassle is worth the return, to be honest.’

I live further afield in west London, an hour’s travel time to the main Olympic site, but rather closer to Hyde Park, Earls Court and Horse Guards Parade, all 2012 venues.

For advice on a new career as an amateur landlord, I turned to A Place like Home, a local agency with a 21-year track record of providing a bespoke short lettings service in Kensington and Chelsea.

‘We offer a personalized service,’ says Silvia Lawson Johnston. ‘We meet and greet visitors, clean the property before and after every stay, and provide fresh linen and towels. Most visitors don’t see the property before they arrive, so we only take on high quality homes, with responsible owners.’

So is my four-bedroom 1960s house in Holland Park up to scratch? ‘Price is partly a feature of heads on pillows – your home sleeps eight, which is good. You have fast broadband, satellite TV, good security, a large living room, easy access to public transport – all essential – and a small garden which is a bonus.’

Yes, yes, but how much? ‘This year, we could achieve a rental of about £2,300 a week net to you. Over the 2012 Olympics, that figure would double. There will be no deductions from the agreed rent as we take our profit from the tenant.’ Like all reputable agencies, A Place Like Home take deposits from prospective tenants to cover any damage.

Which all sounds very tempting, but is it that easy? Well, actually no. Until your agent finds a tenant, there’s no guaranteed income at all. There are also a number of legal issues to consider, according to Tim Hyatt, Knight Frank’s lettings guru.

‘You should check your mortgage contract carefully and get permission if required. Likewise leasehold agreements,’ suggests Hyatt. ‘Local authorities can be tricky – Westminster prohibit short-term lets of less than three months in leasehold property. You need to inform your insurers, and get the correct gas and electrical safety certificates. And don’t forget, rental income is subject to income tax.’

One such agency is Douglas and Gordon, who look after 350 properties in southwest London. Jane Slade, the Sunday Express Property Editor, has a four-bedroom house in Wandsworth. ‘It’s a lovely family home,’ says Annabel Hay of D&G, ‘but geographically, it’s not ideally placed for the Olympics.’

‘Another consideration is how ‘heavily’ a property is furnished, i.e. how many paintings, precious carpets and sentimental valuables it has. We would suggest removing most,’ advises Hay, ‘before letting.’

The potential rental income for Jane Slades’s house is about £1,200 a week over the Olympics minus the 30% agency fee and VAT. ‘For a profit of £800 a week minus income tax, it hardly seems worth it,’ sighs the editor wistfully.

The Olympic effect isn’t limited to London. Weymouth in Dorset is hosting the sailing, and Philip Mutch and his wife Carole know an opportunity when they see one. ‘For our three-bedroom bungalow, we’ve been told we could get £1,300 a week for the three weeks of the competition, so we might move out and stay with a friend.’

They’ve signed up with Dorset Lettings, who are already getting Olympic enquiries. ‘Even the qualifying events in summer 2011 are generating interest,’ reports the agency’s Ann Fooks, who has good connections with the international sailing teams.

‘The house is our main asset so if this is a way of generating a bit of extra income, why not?’ says Philip Mutch.

Dorney Reach, across the Thames from Windsor racecourse, is the venue for the Olympic rowing and canoeing, with up to 30,000 spectators a day expected at the Eton College owned venue. Anticipating strong corporate and media demand, local agent Peter Smith of Lakelets already has 300 amateur landlords on his books.

‘As a ball-park figure during the Olympics, we reckon people can get £140 per person per night,’ he says. He’s already had interest from Russia, with well-appointed family houses probably the most sought-after property.  Lakelets are only charging landlords 20% including VAT, about 10% under the equivalent London commission.

For an upfront fee, there are also websites aimed at potential Olympic landlords, but without sound legal advice the novice can easily come unstuck with a tenant they can’t shift or uninsured damage to their home.

Events like the Olympics, Wimbledon and even the Royal wedding do give home-owners an opportunity to make some spare cash, ‘but take professional advice,’ counsels Tim Hyatt, ‘and only go into it with your eyes wide open.’

Will I rent out my house? Well actually, I’m looking forward to all the razzmatazz, so I’ll probably stay and enjoy the fun…